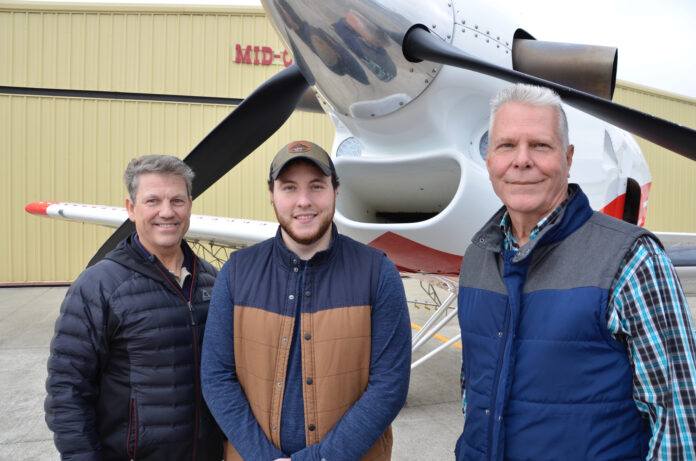 “This airplane just goes.” That’s the sentiment expressed by long-time Thrush pilot and 510 BEAST operator Tracy Stokes. Although the weather wasn’t cooperating for AgAir Update’s planned evaluation flight of Cascade Aircraft Conversions BEAST, a PT6A-140AG conversion nested inside their proven pressure cowl, Tracy was able to demo the aircraft and sit down with Mid-Continent Aircraft and Cascade Aircraft Conversion team to tell the story of how the monster of an airplane came to be. The idea was born from a recognized gap, about four years ago, in the market between the PT6A-34 powered and -60 powered 500-gallon Thrush. Instead of initiating a more complex Type Certification on Thrush, Pratt & Whitney Canada suggested an STC Firewall forward kit using the PT6A-140AG turbine engine for the Thrush 510. Pratt & Whitney supplied a project PT6-140AG boasting an 867 SHP engine to Cascade Aircraft Conversions, which possessed a successful history completing firewall-forward STCs. Pratt & Whitney also predicted the additional value of conversion using the -140AG engine for both the 510P and 510G model aircraft in conjunction with Cascade Aircraft’s extremely effective pressure cowl.

The Pratt & Whitney/Cascade Aircraft Conversion partnership already had a proven track record with the PT6A-41/42 turbine conversion STC for the Air Tractor AT502/502B and the 500-gallon Thrush. The discussion about installing this PT6A-140AG engine on the 510P/G model aircraft opened up a meeting with Mid-Continent Aircraft. They agreed to provide a 510P airframe and the necessary flight testing for the project to complete the STC certification. Cascade Aircraft Conversions took time without the aircraft to refine the installation with an updated plenum and air filter design, a boost start system, sealed batteries and a redesigned engine mount. When the Thrush 510P returned to Cascade Aircraft Conversions in September 2019, they installed the updated firewall forward and additional testing was completed. The updated firewall-forward PT6A-140AG kit arrived at the Ag Aviation Expo in 2019 and the “BEAST” conversion was displayed. Also in 2019, Randy Sandstrom at Prairie Dusters in Canada provided a GE H80-powered 510G for the STC project. This enabled Cascade Aircraft Conversions to dual-track the STC certification for the 510P and 510G airframes. When checking the air available to the turbine engine with a manometer on the factory air inlet system, the instrument shows a negative pressure (or vacuum) of minus five to seven inches of water-column of air. The same manometer test with the Cascade Pressure Cowl installed shows a positive pressure of plus 11-12 inches of water-column of air.  The increased air availability delivered to the turbine engine and reduction in ITT temps dramatically increases the longevity of the heat-critical parts in the turbine.

Tracy Stokes from Arkansas, reports an increase of 10-12 knots on the typical ferry from the field. He works the aircraft around 37 lbs of torque burning 60-62 gallons an hour. In the hot and humid summertime Arkansas conditions, full-load departures are a non-event.

The successful 20-year history of the Cascade Aircraft Conversion Pressure Cowl installation on several agricultural aircraft models that force positive pressure and clean air to the turbine engine proves the huge long-term benefit of the Cascade Pressure Cowl addition to the PT6-140AG BEAST kit for the Thrush 510P and 510G models. The design also provides easy maintenance access to fuel nozzles, front chip detector and the air filtration system. Once the side engine cowling is off the aircraft, the air filtration system can be removed in less than two minutes for service. The filter media used in the system is long-lasting and serviceable. ·       Boost Start System – Combined with a controller and the new dual-sealed batteries –  starts the turbine in under 15 seconds at a substantially lower ITT than a regular start. These quickstarts start the engine at cooler temperatures providing a further benefit toward extending the life of heat critical parts in the turbine engine. The fast start also gets the engine up and running with far less noise than a regular start. Operators no longer have to shout at their ground crew during the start procedure.

·       Certification of the aircraft to 10,500 lbs under an increasingly demanding testing requirement

The combination of the Cascade Aircraft Conversions Boost Start System and the Pressure Cowl is a 1-2 punch for setting up the operator’s workhorse for the lowest possible long-term maintenance costs while maintaining profitable peak performance. A new 108” AVIA three-blade propeller provides more thrust along with significant noise reduction and no harmonic-resonance issues throughout its operating range.

Randy Sandstrom reported that after two years of extensive testing on rough airfields, including some with lots of rocks and gravel, his Avia prop looks nearly like it did when brand new – no rock chips or missing paint. The Avia prop design puts out the thrust while avoiding sucking up FOD. This durable propeller is easy to ship and install as the blades and hub ship in separate boxes. “The BEAST truly makes the 510 Thrush a 500-gallon airplane any day, and all day” – Randy Sandstrom.