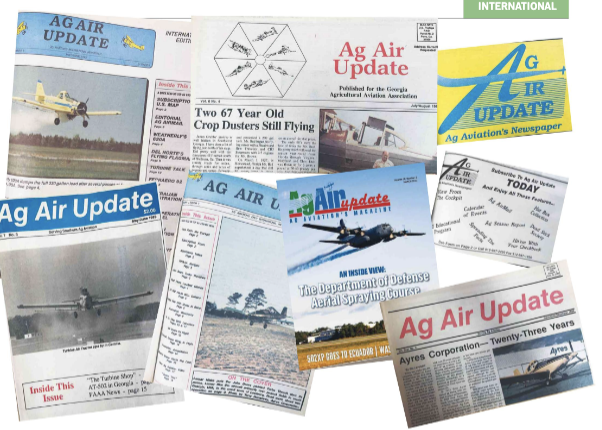 AgAir Update has been bringing ag aviation news to ag pilots for a long time, at least 40 years. I have been involved with the publication for most of those years. It has been challenging to find the origin. The publication is probably older. I simply don’t have any records older than 40 years. I know, from memory, that June Ayres, wife of Fred Ayres, at one time edited AgAir Update for the Georgia Agricultural Association and I believe was followed by the Dixons, at the time operators in south Georgia.

At some point in the very early 1980s, I became involved in the one-page-two sided “newsletter.” I was serving on the board of the GAAA and had been an operator since 1976. I didn’t know anything about publishing. I couldn’t type. I was a “crop duster”! Well, it was voluntary work, and none of the other board members knew any more than I did about publishing.

A very close friend came from a newspaper family to my good fortune. He convinced me to turn the 8.5”x11” newsletter into a newspaper. The most significant problem for me was finding all the content for the minimum press run of eight pages, from two small to eight large pages. I will never forget my newspaper friend saying, “We’ll fill it with pictures.” Of course, he was motivated to help me with this project because his company would be printing it. Now, at over 100 pages, the challenge is still the same!

Print and mailing costs increased when I changed from a newsletter to a newspaper. I needed to find a source of revenue to pay these bills. The GAAA and I had made a deal that if I made sure all GAAA members received a free subscription, I could own the publication and any revenue and bills it incurred. Those were scary times. Luckily, I wasn’t dependent on AgAir Update for an income since I was still flying ag.

After changing to newsprint, one of the first things I did was expand the subscription base to Florida and Alabama, the other two states in the tri-state SouthEastern Aerocultural Fair (SEAF). At the time, subscriptions were free.

I had recruited a few advertisers, namely Southeastern Aircraft Sales & Service, Thrush, Air Tractor, AirSouth Insurance, and a few others, which are still advertisers in AgAir Update after nearly 40 years. I expanded the readership to include the southern states from Texas eastward to the Atlantic Ocean.

By 1990, with success in the South and demand from the rest of the U.S. and parts of the world, I took the publication worldwide with a paid subscription. It wasn’t long before Latin-speaking countries took an interest in AgAir Update. This was when the journey into Central and South America began in the early 1990s. Bringing the entire worldwide ag aviation community together through AgAir Update, I consider one of my best accomplishments during my 49 years of flying.

The year 2000 came, and I had to make a decision. Up until then, I had not taken a salary from AgAir Update, depending on my ag flying and other business ventures for an income. I was 47 years old and not getting any younger. I would have to decide between ag flying and the much more time-consuming AgAir Update. That’s when I hung up my helmet for ag flying for hire. I had completed a 27-year career flying ag. That was 22 years ago. Yeah, do the math. I’ll be 70 this year. How did that happen?

To my good fortune, my son, Graham, grew up in both the ag flying business as an infant and the publishing businesses from the age of about 15 years old, 27 years ago. Graham worked for me while in high school. He went off to college for a couple of years, then returned to work full time for the newspaper. As often happens in a working father-son relationship, we did not see eye-to-eye. He left to seek his fortune in public safety, from a fireman to a paramedic and finally a flight paramedic on a helicopter.

After about eight years, Graham grew tired of the medical field and wanted to come back to work at AgAir Update around 13 years ago. I am sure glad he did. He helped further expand the publication, growing it in content and publishing formats. Of all things Graham did at AgAir Update, one of the most notable was being responsible for the present-day magazine format.

On January 1, 2021, I sold AgAir Update and its affiliate publication, AerialFire, to Graham. I had already started taking a backseat from operations a few years earlier, but now I have moved even more towards retirement. I still participate in the publishing of AgAir Update, such as my editorial, some articles, and hard-earned advice. And I will continue to handle AgAir Update’s two Latin versions. I have not one moment of regret with the way everything evolved and continues to evolve. Forty years of AgAir Update has been a true blessing.

Hours vs. Seasons vs. Years