First Year in the Saddle 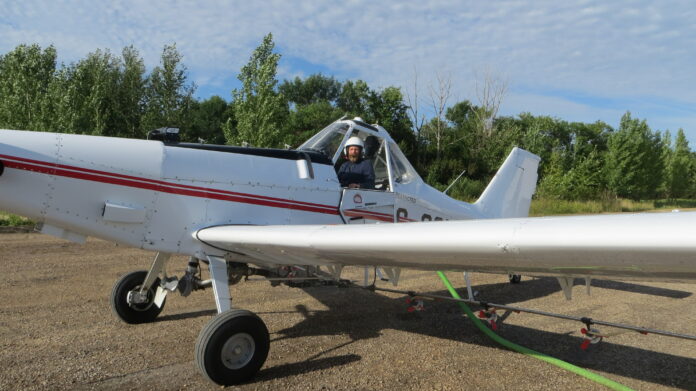 Jeremy Knibbs was brought up on a farm in southeast Saskatchewan in the great grain belt that extends well down into the United States. As a youngster, there was ample opportunity to view cropdusters in action from spring pre-emergent to fall desiccation operations. While his interest in aviation was always there, a full-time commitment came a bit later in life.

“I had worked as a journeyman carpenter through my 30s, and basically, I was looking for a career change. A friend and I were doing some roofing on a farmhouse, and it just so happened there was an ag airplane working the field right next to the homestead. I remember saying, “holy cow!” as we watched the pilot smoothly zoom in and out of the field so low that you could easily see his sunglasses. That just helped cement my desire to get into aviation full-time.”

Fast Tracking in the Pilots Lane

For those interested in an aviation career, the process can initially seem very complicated, with several options and decisions to be made through the many stages of training.

“When I was thinking seriously of becoming a pilot, many questions arose as to what the best route was, what’s it going to cost, and where I could get some first-rate training. I knew that a lot of commitment and studies would be required. But I bit the bullet and started my PPL at the Estevan Flying Club in 2020, with my first solo on July 27 of that year.

Our daughter was born in March of 2020, just when COVID hit, and so with all that was happening, I hunkered down in the books and tried to get everything done as quickly as possible. I continued my flight training towards a CPL in Estevan, taking online studies with Harv’s Air out of Manitoba and doing some simulator time at the Regina Flying Club.”

Building Time in a Taildragger

“Because I wanted to get my commercial rating and wasn’t looking at airlines, I knew I needed to get tailwheel time because I was looking more in the line of cropdusting or aerial survey. So, I purchased a Piper PA-20 Pacer and did the majority of my training in it. That also necessitated finding a Transport Canada inspector who could do CPL check rides in a taildragger, which took me to Yorkton.”

There’s an old adage about the weather on the prairies. If you don’t like what you see, wait a couple of hours, and everything will change. Sometimes for good, sometimes for the not-so-good.

“Initially, we couldn’t get the weather to cooperate for my CPL ride, and we had to schedule it a number of times from week to week. It was a bit frustrating, but eventually, we were able to do the ride, but we had to use a 172 because the radios in the Pacer packed up just as we were taxiing out.”

On To Ag Flying

“Once I had by CPL, it was off to North Battleford to take a comprehensive ag aviation course from Battlefords Airspray. Again, the weather wasn’t very cooperative, but eventually, it settled down, and we successfully completed the program by the beginning of May. I already had a job lined up near my hometown and had worked as a mixer/loader the year before, so I was very familiar with aerial application operations.”

Training in any industry is one thing, but getting down to the actual work is another. Whether carpentry, welding, or agriculture, there is always a big step from classroom to full-time employment.

“One of my first jobs as a new ag pilot was to pick up a Piper PA-25 Pawnee for Brigden Ag Air and bring it to their airstrip. I was very fortunate because before spraying operations commenced, I could spend some time coming up to speed on the Pawnee and its dispersal gear and GPS navigation system.

I remember I was pretty nervous with the first load of chemicals, like going on your first solo again. The area has a lot of obstacles like pumpjacks and powerlines, so it was a bit of an eye opener for me as it seemed like everywhere I was going, there were obstacles of one sort or another.”

For anyone who has worked through PPL, CPL, and ag pilot training courses, there is a lot to learn and a lot to remember. But the hard work and excellent training serve as a solid basis once literally in the field.

“I went back to my training and did the best I could trying to fly the Pawnee with the ball centered and on airspeed. I stuck to the checklist and tried to develop a routine and get into a groove, which took a little while, but eventually, things started to smooth out.

One of the first challenges regarding track guidance was transitioning from the Satloc system I used in training to the Pawnee’s Ag Nav system. I spent a lot of time on the ground going over the new Ag Nav procedures, which paid off once we got into actual spraying operations.”

A Fraternity of Wings

For anyone entering a new business, the difference between success and failure on the job is often directly related to the support novices receive as they learn the ropes.

“One thing that really helped me get into a working groove was that everyone was open to discuss any questions I might have. I had the phone numbers of the instructors at Battlefords and my fellow coursemates, and it seemed like everyone just wanted to help, especially my new employers at Brigden Ag Air. I never felt any pressure to fly when I didn’t think conditions were suitable, and all the equipment they had was top-notch. You could tell from the get-go that the emphasis was on safety.”

With any new job comes a steep learning curve, along with the need to adjust to issues or circumstances that have not been directly covered in the training syllabus.

“One of the first surprises for me was the number of spectators you get when spraying a field, who find it fascinating to watch an ag airplane in action.

Another surprising thing I found was how many decisions have to be made on each flight. Are winds within acceptable parameters? Is it too hot or cold both for the application as well as for aircraft performance? Are there neighboring susceptible crops? What obstacles are apt to cause problems? Does the load size fit the field size? Am I carrying too big a load for the temperature and RH? It feels like your helmet is on fire, particularly when you are just starting to develop a constant routine that will make the job safe and effective.”

In the ag aviation business, there is a gradual evolution from smaller aircraft to large and more sophisticated machines. However, the focus is still the same:  do the job safely and effectively.

“I’m looking forward to switching office seats from the Pawnee to the Turbo Brave already at the Brigden strip. If there is one element that stood out throughout my first year of ag flying, it is the vital importance of keeping a “Safety First” attitude in the air and on the ground.

As an experienced pilot said to me, ag flying is simple. Just ensure you have the same number of landings as takeoffs. And if something doesn’t feel right, don’t ignore that stubborn feeling. Ensure you’re not missing something or there is an issue that needs your full attention.

It was a great first year as an ag pilot, and I can’t wait to climb back into the saddle for year two!”