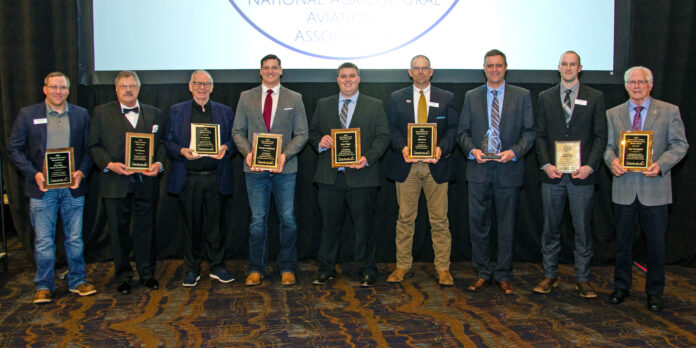 The agricultural aviation community honored the recipients of the 2022 NAAA Awards last month at the closing banquet of the 2022 Ag Aviation Expo in Knoxville, Tennessee.

Hosted by emcees Rod Thomas and Eric Klindt, the 2022 awards ceremony celebrated the achievements of nine NAAA Award recipients. The following individuals were honored for their contributions to the betterment of the agricultural aviation industry.

The awards ceremony was marked by several heartfelt acceptance speeches, including remarks by Lee Turnquist, who received the Zoren and Joan O’Brien Memorial Outstanding Service Award.

“EAA founder Paul Poberezny once said, ‘Airplanes bring us together, but it’s friendships that keep us together,’” Turnquist told the audience. “Let me expand a little and say the love of flying and ag aviation brings us together, but it is the NAAA, the hardworking staff, NAAREF, volunteers on committees and each one of you out there that is the glue that holds us together.”

To nominate somebody for a 2023 NAAA Award, please visit AgAviation.org/awards.