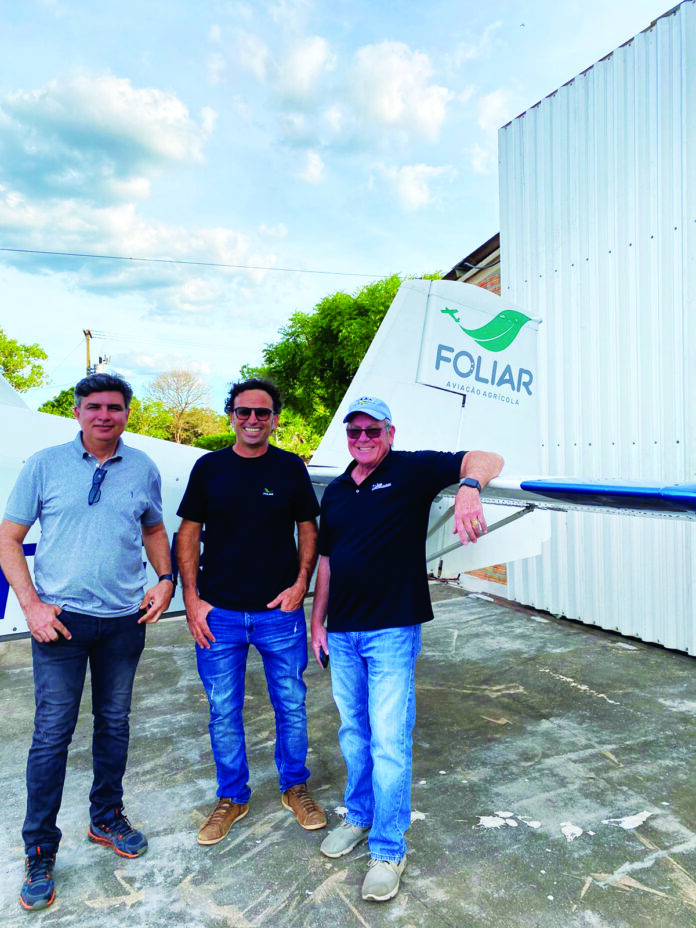 For this particular trip to Brazil, I visited the state of Tocantins for the first time. Tocantins is in a subtropical, northern region of Brazil. It is the newest of 26 Brazilian states. Over 35 years ago, the state used to be a part of Goias. I entered the state by airline, arriving at the capital city of Palmas. From there, Gina Hickmann, my Brazilian representative, and I traveled by car 200 kilometers west to the city of Lagoa da Confusão where I visited two successful ag operators.

This article focuses on Foliar Aviação Agrícola, owned by brothers and pilots Cristiano and Eduardo Juliani.

Foliar is a large ag aviation company with 12 ag planes, including the first P2 Thrush to be delivered in Brazil. Things were not always this way, and success came after much hard work and persistence. In 2004, the brothers decided to look for new opportunities, choosing another region of the country to work. They went to Querência, Mato Grosso, and formed Foliar Aviação Agrícola to set up an operation for spraying and flew there for four years, initially operating an Ipanema EMB-201A They also flew in the Lagoa da Confusão between seasons in Mato Grosso. Eduardo had already lived and flown in both states.

With the increase in crop areas, the offer for work, and the potential for better ag-flying conditions, in 2008, they moved Foliar’s base to the area of Lagoa da Confusão making it their primary base of operation. During these years, two Cessna Ag Trucks were added. And each year (season), Foliar would add another Ipanema until the fleet grew to seven or eight Ipanemas. They operate from a recently extended runway, from 1200 meters to 1600 meters bearing the name of the partners. The company has ten pilots hired for the 11 actively spraying ag-aircraft. However, Foliar’s aircraft operate from over 70 airstrips around the area where it provides ag aviation services. Although both Cristiano and Eduardo have flown ag for over 15 years, today they are busy managing Foliar. The company has a strong family administration. Cristiano’s wife, Márdioli, a lawyer, assists with the company’s legal work. And the partner’s sister, Jaqueline, tends to the company’s administrative duties. During the season, Foliar will dedicate one-half the aircraft fleet to dry work and one-half to wet applications. The aircraft will fly approximately 400-600 hours each year. Dry applications on rice are about 25% of the applications applying 44% urea at 50-60 kg/ha, or a blended fertilizer of 30-0-30 at 100 kg/ha for two to three applications. Rice work starts in November and stops at the end of March or the first of April. Eighty percent of Foliar’s work is over rice. Of those applications, 25% are dry, and 75% are liquid applications. Soybean, black beans and corn applications make up the remaining 20% of the work and are treated from April – October. This allows for year-round flying for Foliar. Foliar Aviação Agrícola is another Brazilian ag-aviation success story. Eighteen years ago, two brothers, Cristiano, Eduardo and his wife carved out a business in a new, almost remote area of Brazil, expanding from one Ipanema to a fleet of 12 ag-aircraft; with a progressive outlook to the future by buying the first P2 Thrush to operate in Brazil.